Poker strategy always comes down to betting. Betting in poker is a core part of the game, something that many players tend to overlook because they’re too busy thinking about the math of the cards or putting specific systems into play. The truth is, though, that the only way you’re going to be a good poker player – that is, a poker player who actually wins poker tournaments – is to understand how betting in poker really works.

Betting in poker isn’t just about managing your own stack. In many ways, it’s also about figuring out how to maximize your poker hand in a way that will allow you to dictate how the other players play. This, in turn, is what lets you win more money, craft a strong poker strategy, and eventually become the type of player who dominates any Texas Hold’em poker tournament.

The key here is learning exactly why and how you’re betting in poker. You’re never going to bet just because of a gut feeling or just because you have a certain read. You’re going to learn how betting in poker works, what it really does, and ultimately how it will impact every poker game that you play.

There’s a lot that goes into betting in poker, and we can’t really discuss the advanced techniques until we get the basics down. There are really specific situations in which you’ll want to re-raise or you’ll want to call, but you can’t understand those until you get your basic betting down. In fact, we’re just going to talk about the very beginning of the game, before the flop ever occurs.

Betting In Poker: A Word of Warning 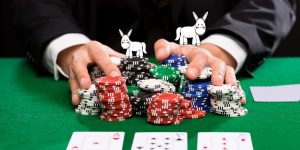 We’re going to be talking about betting here, but you need to keep one thing in mind all the time – you’re going to fold far more often than you will ever bet. You’ve got to do a lot of work to learn what kind of starting poker hand is actually worth keeping, and you’re going to have to get over that universal tendency to want to see the flop.

Everybody wants to play poker. That’s why people come to the table, after all. There’s a lot of money to be made off of people who just want to play, and it’s in your best interest not to be one of them. It doesn’t matter where you play or with who you are playing – you absolutely need to get it through your head that it that folding your starting hand is the norm rather than an admission of defeat.

Betting In Poker: Reasons to Raise

When you first start playing poker, raising is going to seem very scary. Why raise, after all, when you can just check around or call and figure out what happens next? It’s a completely logical philosophy on the part of a new player, but it’s an error nonetheless. It’s not necessarily going to hurt you as much as some of the other mistakes that you can make, but it’s a money loser over the course of your career.

Successful poker players are aggressive poker players. That doesn’t mean they go in for every hand they are dealt, but it does mean that they are going to push things when they choose not to fold. If you’re in, you need to keep on raising.

So, beyond setting yourself up as an aggressive player, why are you going to raise? There are four really good reasons to do so. You’ll either raise to reduce the number of players, to take control of the board, to bring more value to the game, or to force other players to fold their hands. Understanding each should give you a good idea of why it’s so important to keep raising. 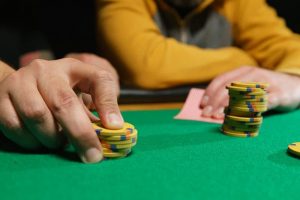 The more players in a poker hand, the more danger that you are in. It’s rarely a good idea to be in a big pot against more than a couple of other players because you’ll have to start dealing with that most problematic of poker issues – luck. You might have a great starting hand, but having more players in the game means that there’s a much better chance of someone getting something crazy.
Betting In Poker – Reducing the Competition

When you play aggressively and raise on good starting hands, you’ll start to thin the herd from the word go. This makes it easier for you to read the people who stay in and reduces the sheer number of decisions you’ll have to make as the game goes on. Betting is your method of controlling against whom you’ll have to play while staying within the poker rules.

Every move you make at the poker table sends a message. Betting in poker is usually an announcement that you have something good, something of which your opponents must take note. If you choose to start betting, you’re sending a message no matter what happens with the flop.

Betting in poker requires your opponents to make assumptions about your game. If you keep betting, they’re going to have to take what you’re doing seriously. You’ll force them to react to you rather than allowing them to control their own movements, which puts the odds back in your favor.

This should be obvious, but one of the best reasons to start raising in poker is to make more money. If you have a really good starting hand, it just makes sense that you would want to see more money on the table. Yes, there are a lot of calculations that you will need to do in order to figure out exactly what to bet, but you’re still going into the flop with the same basic goal.

So, what are you doing when you raise for value? As a start, you’re trying to get more money on the table. At the same time, you’re trying to knock as many other players out as possible so you have better odds of getting to that money. You’re even trying to force your opponents to make mistakes, all so you can force them to give you more of their money when you finally win the hand.

The question you’re asking yourself is not whether you should bet, then, but rather how much you should be betting. It’s always a good idea to be fairly consistent with your bets no matter how strong your hand, if only because doing so will make it much more difficult for your opponents to get a read on what you are doing.

So, what’s are the raw numbers? Doubling or even tripling the big blind is usually a good idea, with even bigger bets being appropriate if you think that the players in front of you can be bullied into doing what you want. Doing this consistently not only makes it impossible for other players to figure out what you are doing, but it also allows you to hit all three of your objectives at once.

What you need to avoid, though, is just raising the minimum. Virtually every new player does this when everyone else at the table checks, leading to that horrible situation that happens when a player gets overconfident. It makes sense to try and build the pot for sure, but it’s not exactly the kind of bet that’s going to make anyone else fold out of the game. Simply put, there’s not enough force behind the bet to put you in control of the game.

Forcing other people out absolutely requires aggression. Little raises can seem like a safe idea, but they aren’t going to make a confident player fold. Instead, you’ve got to build the story of your hand by offering those raises that a smart opponent isn’t going to be willing to call. You’re going to try to walk that fine line between looking like you’re trying to bluff and making it impossible to stay in the game.

When Should You Call?

Yes, you want to be aggressive during your poker game. And yes, you are going to want to bet most of the time when you choose to stay in a hand. From time to time, though, you are going to want to call before the flop. This happens most often when you are in situations that either give you a chance to raise later or that put you in a minimal amount of danger with a mediocre hand.

Poker position is always one of those important factors that players ignore. If you are the first person to act, there’s not always a good reason to start off with a raise – especially since you will already have the ability to raise again once everyone else has either bet or checked. This is, after all, your chance to exercise a little bit of strategy from a position of incredible strength, something that’s not always easy.

If you are in a position that allows you to see a couple of other players either check or put in a tiny bet, it’s not always a bad idea to call as long as your hand is reasonably good. This doesn’t mean having preferred cards, but it does mean that you’re in a position that could allow you to win.

The big thing that you are going to have to learn, though, is that calling is rarely your best option. In most cases that players choose to call, either raising or folding would have been the preferred option. Generally speaking, you are going to fold most of your hands, bet aggressively on the hands that are worth playing, and you’ll call only in a few controlled circumstances. Calling too much is what eventually kills your stack.

Try to remember that you always need a good reason to do what you’re doing. You need to sit down and think about your position at the table, how your opponents are playing, and the story that you want to tell before you do anything. You need to know why you are making your choices before you are doing anything. Skilled players don’t just follow strategies blindly – they understand precisely why they choose every move they make at the table. See you at the WSOP!

How many rounds are there in poker betting?

There are four rounds of betting in Texas hold'em poker. This includes: pre-flop, flop, turn and river.

What does it mean to bet in poker?

How many times can you raise in poker?

In NL Texas hold'em, you can raise as much as you want, up to all your chips. In fixed limit, the betting is capped after one bet and three raises, but there is no limit to betting if it's heads-up.

Can you raise your own bet in poker?

No. You cannot raise your own bet in poker.

Only 10% of Poker Players Are Successful & Make Money