7 Poker Books to Elevate Your Game to the Next Level

When you read this title, you probably thought: This dude is going to write about his own poker books. Do you really think I would do that? If you answered yes, then you’re correct. But I’m only going to mention a couple of them, and I’m not going to begin with my own poker books.

It’s so much work that I don’t want to go back there. However, I might have come up with a new concept, which will decrease my workload.

In most cases, I will still do everything above and take the traditional route with publishing written content in regards to my poker books, but I’m going to attempt something different with two upcoming poker books.

I’m going to Texas to play at The Lodge Poker Club later this week. I’ll be signing books there and all that. Part of the deal I made with the owner is that I will write a book titled: A Week at the Lodge. The book will be based on my experiences.

Since I have so many projects going on at once (five books, one movie, poker articles, poker tournaments, etc.), I’m going to post the written version of this book on his website. This will decrease my workload. And I can send my fans to his site. I’m doing the same thing for The Poker Player, which you will be able to read right here on Poker Journal!

Contents hide
#1. One of a Kind
#2. Super System
#3. Every Hand Revealed
#4. The Professor, The Banker, and The Suicide King
#5. Harrington on Hold’em
#6. The Perfect Range
#7. Poker Notes
Final Thoughts
Poker Books – FAQ
What are some good poker books to study poker strategy?
What is your favorite poker book? 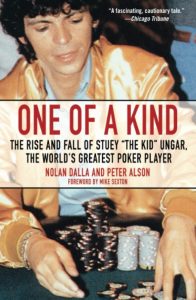 This isn’t a poker strategy book by any means. At least it’s not intended to be. One of a Kind is about the life of Stu Ungar. He had a brilliant mind, but like so many brilliant minds, this also meant a lot of demons. His demons came in the form of addictions to cocaine and sports betting, neither of which helped his poker career.

There are also some sad parts of the story. There is one sad part in particular that the majority of the poker world has no clue about. You would only know about it if you read the book. It hurts me to even think about it.

In regards to poker games and how this book impacted me, it allowed me to view poker through the mind of Stu Ungar. That’s how I personally approached the book. This went beyond just poker games, though. By reading about how he approached life and handled situations off the felt, it gave me a good idea about how his mind operated. Poker resembles life, and our personalities tend to reflect our playing styles.

The game of poker is different now, but many people who knew Stuey said that his A Game would still dominate the game today. The problem is that Stuey’s A Game showed up less and less prior to his death. 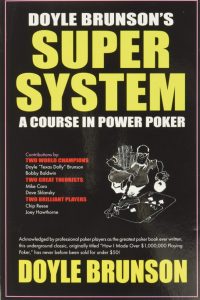 This book was written by Doyle Brunson in 2002. He had no idea what he was getting himself into because he wrote this poker book two years prior to the poker boom. When the poker boom hit, his book sales went to the moon. He has said that he wished he never wrote the book because he gave away more information than ever intended.

This book did, however, help his popularity. He would have been a poker legend either way. This poker book was more like gravy.

I would recommend Super System, but only as a base. The game has changed a lot since then. At the same time, the information in this book should help you prior to moving to the next level. There are some concepts in there that will stick with you. 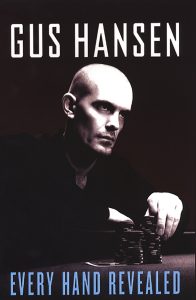 Every Hand Revealed was written by Gus Hansen. This was a fun read, especially because Gus had no idea what the end result would be. The premise is that Gus recorded every single hand in a poker tournament, then wrote about it. He used an audio recorder to do this, then transferred those audio notes to the written word.

It was pretty cool to see how someone like Gus, an AGGRO player, approached poker tournaments.

#4. The Professor, The Banker, and The Suicide King 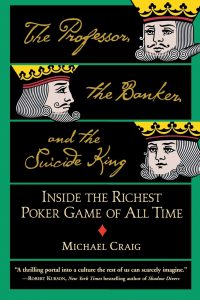 This wasn’t one of my favorite poker books because it wasn’t a fast read, but it was definitely interesting. To sum it up, it’s about a wealthy individual who wants to take on the pros for high stakes. He fails but keeps trying to win.

You will definitely pick up some poker tips with this book because some of the pros reveal what they were picking up from their opponent, which made it easy to figure out his poker hands. 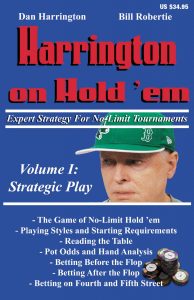 Dan Harrington is known as a very tight player. He blows me away in that area. I don’t play nearly that tight. But I will say that Dan knows how to use his image to his advantage. I have watched him pull off massive bluffs several times. He gets away with it because he spends so much time establishing that super-tight image.

Instead of throwing in bluffs once in a while, Dan will wait for the exact right time to use his secret weapon. It is highly effective. This approach would definitely fit into our poker rules for winning.

This book isn’t about bluffing. It’s about every technical poker concept you can imagine. The good news is that Dan makes it not boring. I’m not saying it’s exciting or anything like that, but if a technical poker book could be written in a non-boring way, Dan pulled it off.

Some of the poker concepts written about in this book are dated, but others are not. It’s not Dan’s fault because the game is constantly evolving. I will say this, though. If you read this book and you play low-stakes, you’re going to gain an edge over your opponents. Harrington on Hold’em is one of the best poker books to read whether you like to play in traditional poker games or Texas Hold’em poker tournaments. 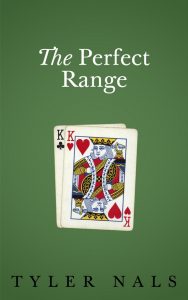 I guess it’s my turn now. I know some of my fans are reading this, and I know that once they see those three words: The Perfect Range, they smile, whether that’s inside or out.

What nobody knows until this exact moment is that the concept for this book was created as I stood at a urinal in the restroom next to the Harrah’s Cherokee Poker Room. I guess the best ideas don’t come in the shower, but at the urinal.

Either way, I knew I needed to slow the heck down. I was playing way too many poker hands, and it was costing me a lot of money. Somehow, someway, the entire concept of SPATS, which is the poker strategy written about in The Perfect Range, came to while reliving myself. I applied this strategy immediately, and I immediately began to see results.

This DOES NOT mean that you should always play these hands. It means that these are the only hands you’re allowed to play, with the exception of having a little freedom on the button and blinds.

Can you imagine how frustrating it would be to play against a player like this? Think about it. This is a player who usually only play premium hands, but that three-bet from middle position could be 75-suited. And once you think you have this player on a range of poker hands, he raises with 97-off from the button, which you would never see coming (freedom on the button).

Basically, this player is patient while also being unpredictable, and he never goes on tilt. Do you want to play against a player like that? I sure as hell don’t.

The one danger is Ego. Hear me out. When you start playing well, other players are going to become jealous of your success and start giving you backhanded compliments. Sometimes, they will come straight out and tell you you’re a NIT or something like that.

I will admit that I recently fell victim to this, which was out of character. A dealer said that I was a tight player. I agreed but added that I’ll throw in monkey wrenches. He said, “But, yeah, you’re a tight player.”

I was playing a low buy-in Turbo event the next day and went AGGRO. It worked for a while. I was controlling the table, but this was still a sanctioned event opposed to a Daily or Nightly that you can steamroll. As is always the case with AGGRO players in these events, I eventually lost all my chips.

This was good, though. It reminded me that I’m not a high-powered offense with no defense like the New Orleans Saints. I’m defensive and deceptive like the Chicago Bears. I need to be the Chicago Bears, not the New Orleans Saints. I need my opponents to come to me, not the other way around. One of the best poker tips I can give you is to be you! It’s the only chance you have.

A last note on The Perfect Range, it’s a story. The poker strategy is mixed in, which is my differentiation for poker books. 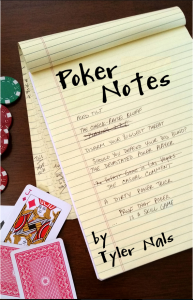 I wrote this a long time ago. At that time, I would do anything to win to pay the bills. It’s mostly cash game information, but there are definitely some awesome strategies you can apply to Texas Hold’em poker tournaments. If you choose to read this book, please understand that I don’t operate in such a relentless manner anymore. At that time, I wasn’t looking to make friends. I just wanted the money. At this time, friends are more important than the money.

If you were to read all the poker books above, you would definitely become a better poker player and elevate your game to the next level. Reading poker books with valuable information fits into our poker rules for winning.

If you want to really excel at poker, then I would recommend reading some of these books over and over again.

What are some good poker books to study poker strategy?

Even though it’s dated, I enjoyed Super System by Doyle Brunson. I also enjoyed Every Hand Revealed by Gus Hansen because it allows you to see how another player sees situations.

What is your favorite poker book?

One of a Kind by Nolan Dalla, Mike Sexton and Peter Alson.

Poker strategy always comes down to betting. Betting in poker is a core part of the game, something that many players tend to overlook because they're too busy...