How to Play Poker

What is a Sit-and-Go Poker Tournament? A sit and go poker tournament is typically a one-table tournament featuring six to 10 players. These poker tournaments have a fast structure, often taking less than a couple of hours to complete. Unlike a regular poker tournament that has a set beginning time, a SNG (short for sit-n-go) begins immediately once the maximum number of players have signed up.

Blinds go up quickly, often after 15 to 20 minute rounds or even shorter. These tournaments are played at a variety of entry fees, with many small buy-ins available. The fast nature and small buy-ins make these sit-n-go tournaments attractive to players with lesser skills than in high buy-in tourneys. The standard poker rules for poker tournaments apply.

These tournaments are often played as no-limit Texas Hold‘em. Most of the time, the top two or three places get paid. A 10-person tournament will usually pay the top three places. Your buy-in will typically start you with 1,000-1,500 in chips. Sometimes you will see turbo sit and go poker tourneys, which means a smaller field, faster structure where the blinds go up more quickly, and/or a smaller beginning chip count.

The following sit and go poker strategy guide is short on reading your opponents. It does, however, contain some key concepts and a basic understanding of the poker math involved. Don’t worry. You are not expected to be solving equations at the table. Just know the reasoning behind the math and you will be fine.

How to Play a Sit and Go Poker Tournament 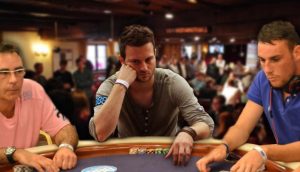 Your method of play in a sit and go poker tournament will change throughout, depending on the size of your chip stack in relation to the big blind. The blinds go up after a predetermined amount of time, often 15 minutes of play. You should be using a tight and aggressive style to be building your chip stack. If you are sitting still, you are falling behind. Here are some basic tips to help you build that stack:

• Against a “calling station” (a player who calls too often with a weak poker hand), rarely bluff.

• Against players who fold too often, bluff more than you would normally. As the blinds rise, you may see the same player move from a calling station to one who folds too often.

• Take notice of your opponents’ tendencies early in the tournament. Don’t rigidly put them in one category or another based on one play, but always be trying to narrow it down.

• Make your bet sizes correct based on your opponents. If a player chases after every straight or flush draw, make them pay a higher price to do so. You cannot always get the exact right bet size, but getting as close as possible to optimal is important.

• Play tighter in early position (the spots just to the left of the blinds that act first) and somewhat looser in late position (especially the button). Acting last (having position) is a big advantage, especially against weak or inexperienced players.

Stages of a Sit and Go Poker Tournament 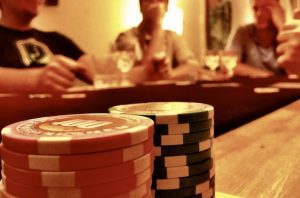 Any sit and go poker tourney can be broken down into roughly three stages. The amount of time each stage lasts will vary depending on the tournament structure, but here is a basic breakdown.

Early Rounds of a Sit and Go Poker Tournament

Your strategy in the early stages of any sit and go poker tournament will closely resemble play in a regular cash game. You should be playing with a tight and aggressive style that maximizes your position and punishes opponents for playing too loosely. Don’t play speculative hands like small pairs and suited connectors out of position. These hands depend on several players entering the pot to be profitable.

That means you need to be on the button or close to it to limp with these hands, and then only when you believe at least five or six players will see the flop. Be careful, aggressive players from the blinds will often raise here to try to steal a pot behind a bunch of limpers. Know your opponents as well as you can. Weak or inexperienced players will rarely attempt a play like this.

Middle Rounds of a Sit and Go Poker Tournament

In these middle rounds, you will likely have seen half the players bust out. When you get closer to being in the money, players will tighten their play, especially those who are sitting on the bubble. Those with very low chip counts are likely to be looking for any good hand to move all-in with.

You must pay attention to your opponents’ chip stack at all times. You may be able to take advantage of someone on the bubble, but this is more pronounced in the late rounds. Look for opportunities with your best hands against the short stacks. They will often be desperate and pay you off with a fairly weak hand. Tight and aggressive is still the best style of play here.

A short stack in sit and go poker tournament is roughly less than 10 big blinds. If you are unfortunate enough to find yourself in this situation, you need to look for ways to double or triple up. If you are in the one of the blinds and a large stack raises from late position, they are typically making a steal attempt. Don’t be shy about shoving all-in with a good hand. Don’t wait until you are down to the felt before making a move. Many an inexperienced player has found himself getting blinded out of a tourney.

Late Rounds of a Sit and Go Poker Tournament

The final stages of a tourney begins when you get down to a handful of players remaining, with three or four players remaining. This is the point in a tournament where players begin to play scared, especially the player in third place. The player with the third-largest stack is often hoping just to get into the money, waiting on someone to knock out the fourth place player.

If you are on the button and the third-largest stack is in the blind, this is a spot to raise with more hands than you would normally. If you have a large stack, use it to your advantage. Players are rightly trying to sneak into the money. Use this time to build your stack.

If you make it to the final two spots, be prepared to be aggressive. Any above average hand goes up in value. It is not likely for your opponent to have a good hand. The player on the button has the small blind and acts first before the flop. If your opponent is too willing to fold from the big blind, you should be actively trying to steal his blind. The action here is often fast and furious. This is no time to be timid.

This is a good time to discuss the Independent Chip Model, a concept you must understand to be successful in tournament poker. Don’t worry, you won’t need to be able to construct a mathematical proof to understand it.

In a regular cash game, the value of your chips never changes. If you have $200 in chips, that’s what they are worth. But with the exception of winner-take-all tournaments, this is not true in tournament play. The reason for this is fairly simple. The winner of a tournament is the last man standing, the player who has won all the chips on the table. The first-place payout in a SNG is usually 50 percent for first place, 30 percent for second place, and 20 percent for third place. The winner wins all the chips but gets only half the prize money. This results in a vitally important strategy that you must understand.

The fewer chips you have, the more each individual chip is worth. This can result in some counter-intuitive moves. Let’s say after posting the big blind, you have one chip remaining in the lowest denomination in play. There are three players remaining. If the other two players are all-in before the action gets back to you, you should fold every time, even with pocket aces. The value of moving up from third to second is greater than the value of tripling your measly stack. This will rarely, if ever, happen. But the concept is tremendously important. Your last chip is the most valuable.

The ICM uses a formula to determine the cash value of your chips. It is often used when determining the amount each player would receive if a deal is made. If you are playing a small buy-in SNG, you don’t need to know this formula, and you don’t need to calculate this while at the table. Just understand it and adjust your play accordingly.

Remember the players in the third stage who played scared if they were on the bubble? Whether they realize it or not, the ICM says this is the correct strategy. In general, if you have a large stack, it can be used as a blunt-forced weapon. A small stack must be protected.

A different effect on the value of your chips is mandated by the blinds. At the beginning with a $1,500 stack, you are in no danger in being blinded out or forced to move all-in with a weak hand. In the last stages of the tournament, that same $1,500 stack could be in grave danger.

SNGs, especially those with low buy-ins, can be profitable since they are often populated with poor players. They also offer an opportunity to learn tournament poker strategies without a great investment in time and money. See you at the WSOP!

What is a sit and go in poker?

A Sit and Go, or SNG, is a one table poker tournament that usually takes between one and two hours. These are good to play because you will usually have a rake-free and all-cash last-longer wager between players who are interested.

How do sit and go tournaments work?

There 10 players and you get a small amount of chips. The dealer has a timer in front of them to indicate blind level changes. It's usually a chop when down to 2-3 players, but that depends on stack sizes.

What does SNG mean in poker?

SNG means Sit and Go, which is described above. If you're going to play these, it's tight early, aggressive mid, tight late.

Does online poker have sit and go tournaments?

Best Ways to “Represent a Hand”

Poker strategy always comes down to betting. Betting in poker is a core part of the game, something that many players tend to overlook because they're too busy...

What Are "Suited Connectors" In Poker?

Is Online Poker Legal in the US?