How to Play Poker

Normally, I don’t take life advice from movies, but when it comes to poker games, there’s no better Hollywood depiction than Rounders. There are some great lines in that film that you need to remember. Matt Damon’s character wisely asserts, “If you can’t spot the sucker in your first half hour at the table, then you are the sucker.” I love this line. But exactly how do you go about reading opponents in poker?

Physical “tells”, as they’re called in the poker world, are a real thing. Usually, they’re not as obvious as in the movies, and in reality, physical tells are not always the best way to be reading your opponents in poker. There are a few other poker strategies that you should use as well.

The first being tendencies, or betting patterns. After playing some time with an opponent you should have a reasonable idea of what kind of player this person is. Another poker strategy that you need to adopt is ranging. Ranging is best used as the hand develops. It’s a process of elimination of all the possible hands your opponent could have and definitely does not have.

These skills take practice and experience but with anything it will come in time. Poker is not so much a game about playing the cards in front of you, as it is a game of reading and studying your opponents. Now, a lot of beginner poker players know this and think there’s some kind of trick to it. They look for muscles twitches or maybe the way their opponent eats an Oreo cookie like in the movie. No tricks just observation skills. 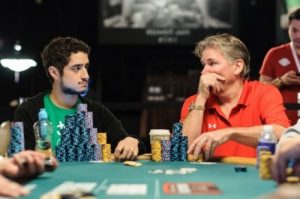 Let’s begin by talking a little bit about physical signs or poker tells. The most important thing when reading opponents in poker is looking at their eyes. They often say that the eyes are the windows to the soul. It’s no wonder that many live poker players wear sunglasses at the table.

So, how can we gauge the strength of our opponents hand without being able to see their eyes? Well, one way is to read the direction of their stare. After the flop comes out, are they staring blankly? Or, are they looking down at their chips immediately? A sudden glance at your chips can be a sub-conscious movement when you know you hit the flop well and want to bet.

Another obvious tell is when an opponent reaches for their chips early. You may have hit a pair on the flop yourself and are looking to initiate betting into the pot. Be aware of your opponent’s actions as you start your betting action. Is he quick to grab his own chips as well? This is most likely a sign that he has a good hand and you should proceed with caution.

Next, does your opponent display any signs of obvious strength? Is he trying to look tough or overpowering? A lot of times a player will splash his chips aggressively into the middle. He will leave his forearm extended towards the center of the table for a brief moment. Though it looks like a strong position, this is almost certainly a sign of weakness. The player is trying to bully you out of the pot.

And the final physical tell is nervous chatter. It’s important to be a bit social while you’re playing at a live table. You’re not talking as if you were at a dinner party, but you are using conversation as a strategic tool. By chatting with your opponents you can infer certain tells by listening for changes in tone or energy. One obvious sign of weakness is nervous chatter. If you ask your opponent a question and he responds with a nonsensical, unintelligible response, he’s clearly nervous and probably has a weak hand. 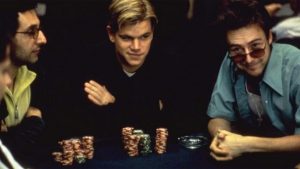 All those physical tells can help you with developing your observation skills game right away, but as the game progresses we should be adopting new, more informative strategies of reading opponents in poker. One way we can do this is by detecting certain tendencies or betting patterns of our opponents. What kind of player is he? Does he aggressively get into every pot trying to bully other players? Is he a quiet, cautious player who rarely raises the pot? Does he tend to bet a certain type of hand in the same manner every single time?

A lot of beginner players are easy to read because of their betting patterns. If they have an ace or king with a high kicker they may bet 2x-3x the pot every time. Or, if they have a high pair they may bet 3x or 4x the pot every time. Knowing our opponents betting tendencies can give us a great read when the hand develops. This can sometimes help us fold a good hand because we know our opponent only bets when they have a great hand.

One tendency you should be aware of is that bluffers tend to bet more at the beginning of the hand than when they have a strong hand. When you are dealt a pair of aces, your immediate thought is to be tricky and disguise the hand. You may just call your opponents with a pair of aces and wait for them to make the mistake of putting in all of their chips.

Well, the opposite is true as well. When players have a weak hand and are trying to win the pot, they show strength and try to bully other players with strong bets. Pay attention to all of the hands during the game even when you’re not involved so that you can begin to pick up on these tendencies.

As you become more experienced with playing poker, you will want to adopt the skill of ranging. That is, developing a range of hands that your opponent could have as the play progresses. It’s important to be aware of betting patterns and amounts, and you also have to take into account the context and texture of the board.

The position of the player at the table is also paramount. A player on the button is the last to act in a given round of betting and is considered the strongest player. Because of the wealth of information he is able to gather before it’s his turn to act, he is at an advantage, and thus can play a very wide range of hands.

Poker has evolved in the modern era from a game of my hand vs. your hand, to a game of my range of hands vs. your range of hands. Using position to help with reading your opponents in poker, predicting their range of hands is an important skill to master. If a flop comes out with an ace or king without any flush or straight draw possibilities, we can say that the Under the Gun or early position player has a ‘range advantage’. That is because an Under the Gun player is generally only going to play with a superior hand such as an ace, king or ace, queen.

The button player is at a “range disadvantage” because as we mentioned before his range is much wider and it is more likely that he has a weaker hand that would lose to an ace, king or ace, queen opponent. By using position knowledge and ranging one can more accurately read our opponents hand.

Reading opponents in poker at the live tables is never a perfect science however. Despite all the things I have talked about here, it’s still important to know that there are many more ways that we can read our opponent’s poker hand. The underlying takeaway is to remain vigilant while you’re playing and try to be observant of everything.

Use your social skills to illicit tells and personality changes. The more you play, the more skilled you will become at detecting ranges, betting patterns and reading opponents in poker. It will soon become an intuitive part of your mental process while examining your opponent.

So, whether you are a brand new player still learning the poker rules of No-Limit Texas Hold’em Poker, or you are an intermediate player looking to gain more confidence when making a critical decision in poker tournaments, I hope that you will be able to absorb the information listed here and use it wisely during your next Texas Hold’em Poker event. Best of luck and see you at the WSOP!

How do you read opponents in poker?

Above all else, pay attention to their betting patterns. Everyone has patterns. Once you pick up their patterns, you will be all over it.

What does "Range" mean in poker?

Range refers to what range of poker hands you will play. For example, someone who plays only premium hands has a narrow range.

How do you figure out an opponents range?

Watch what cards they show. If you pay attention to this, you will know their range.

What should I look for when playing poker?

You're looking at this backwards. You're competing against yourself more than anything else. Look for Ego and get rid of it.

One of the most important keys to improving your poker strategy and skills is learning the right way to recognize and analyze poker betting patterns. I like fish,...

What Are Poker Odds and Outs?

What Are Poker Flops?

How to Become a Professional Poker Player